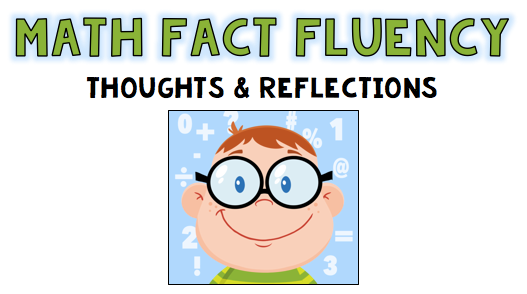 In my experience, when discussing mathematical fluency, math-fact fluency is by far the most frequently referenced topic. After all, success with more complex computation, including work with fractions and algebra, depends on math- fact fluency. Interestingly, teachers at every grade level I work with, all the way up through high school, voice their frustration that the grade level(s) before send them students who are not math-fact fluent. As a former kindergarten teacher, I used to joke that we might as well drill all the way down to kindergarten, where it all began, and blame kindergarten teachers for this problematic epidemic.

Epidemic? Perhaps this is a bit extreme, but it makes the point. So many students pass through math class year after year without math-fact fluency, and this truly is problematic. Lack of math-fact fluency bogs down the short-term memory and inhibits success with topics such as whole number and decimal operations, fractions, algebra, and problem solving.

I personally experienced what it felt like to finally break free of this debilitating stumbling block. As a math specialist, I knew good and well that I was still a finger-counter when it came to addition and subtraction facts. I had simply never committed them to memory. However, as I worked with first- and second-grade students to use mental strategies rather than counting by ones, I finally decided I needed to take my own advice. So, as a teacher with a mathematics degree and ten years of teaching experience, I set out to commit these facts to memory. It was fascinating to experience this as an adult and an educator, noticing that the process initially slowed me down. However, once automaticity set in, I was amazed not only at my speed, but at the clarity that accompanied it. My brain was free to contemplate the larger issues with the problem at hand rather than having to continuously downshift into counting.

Ever since my experience of conquering my lack of math-fact fluency, I have advocated that we do whatever we can to help students address this issue.  That said, I personally agree with experts such as Jo Boaler, who point out that traditional methods such as timed tests and whole-class games such as Around the World perpetuate math anxiety and the notion that being good at math means possessing fast recall. Therefore, we need other ways of promoting math-fact fluency.

So if we’re to abandon the methods that failed me and oh-so-many others as children, what are we left with? My go-to for developing and maintaining math fluency centers on providing five to ten minutes of DAILY fluency-building activities, primarily game-play and other fun activities. Here are a few of my favorites…each requires nothing more than a deck of cards.

Fishing for Tens (or any number): Students play Go Fish using the typical rules, removing the tens and face cards beforehand. However, rather than asking for the same number they are holding in their hands, they ask for a number that pairs to make a ten. For example, if I am holding a 3, I will ask for a 7. Once I have a pair that adds to ten, I place it in front of me. The first player to run out of cards wins the game. This game can be played for other totals by taking removing cards from the deck. For example, if you want students to “fish for nines,” remove the nines, tens, and face cards from the deck. Now they simply ask for a number that pairs with one of their cards to make a nine.

Concentration: Students play Concentration using the typical rules, removing the tens and face cards beforehand. Rather than flipping two cards in hopes of making a match, students flip two cards in an attempt of making a ten (2 and 8, 3 and 7, 5 and 5, etc.). As with Fishing for Tens, this game can be played for other totals by removing cards from the deck. For example, if you want students to make pairs that total nine, remove the nines, tens, and face cards from the deck.

Double War: This game can be played for addition or multiplication. Players each flip over two cards and state the sum or product. The highest sum/product wins the round. The winning player takes all four cards. The game is over when all cards are used up. The champion is the player with more cards at the end.

Salute: This game requires three students and can be played for addition or multiplication. All face cards should be removed from the deck beforehand. Shuffle the cards and divide them into two equal piles, face-down. One student acts as the “judge” while the other two are the players. The two players each pick up one card from their respective piles and place them on their foreheads, face-out (it is important that each player can see the other player’s card but not his/her own). The judge adds/multiplies the two numbers together and announces the sum/product. The players race to figure out their own card values. The first player to correctly call out his/her own card number wins that round and collects both cards. The winner is the player with more cards at the end.

These four card games are but a few that can be used to reinforce math-fact fluency. A simple Google search will turn up hundreds of other options. The point is that daily fact practice using fun and motivating interactions need not center on methods that do more harm than good. By providing students with daily opportunities to enjoy number play and develop their math-fact fluency, we instill in them a confidence, an enthusiasm, and a level of success that so many adults missed out on as children.