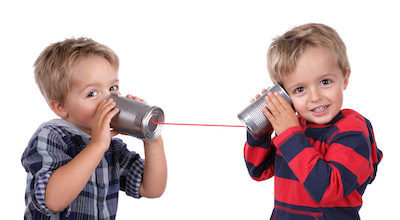 We’ve all heard that “Every teacher is a reading teacher.” However, since learning is a social endeavor, “Every teacher is a communication teacher” makes more sense to me. Explicitly teaching children listening and speaking skills in the context of ones’ own discipline promotes the interactions that facilitate learning. In math class, math games present the perfect scenario for teaching children to talk math.

Below, I have listed four ways in which the speaking and listening standards interact with the standards for mathematical practice and connect to game play. For consistency, I’ve used last week’s post that referenced multiple variations of War as the context for each.

For example, when students played Addition War, I asked them to use a comparison statement before taking the cards. It sounded something like this: “14 is greater than 8.” By listening to my students as they practiced their skills, I could learn more about their thinking and precision.

By asking students to verbalize thinking while playing math games, I ensured that they also rehearsed using mathematical vocabulary. Math-specific vocabulary is rarely used outside of math class. So asking students to integrate these words into their game play increases their usage.

Listening carefully to students’ conversations and use of mathematical vocabulary pays off. When my students were playing Double War (addition, subtraction, or multiplication), I heard Travis proudly state, “14 is gooder than 8.” He was so confident and excited that he had won the round. His statement, however, revealed something I had not anticipated. He had interpreted the mathematical term “greater than” as “better than” rather than “more than.” Because students were required to verbally state their comparisons, I detected Travis’s misconception. I then wove this idea into my instruction just a few minutes later.

Another way to embed language use into the classroom includes teaching students a simple process for explaining their solutions. My favorite structure comes from a writing structure I used: “First – Next – Then – Last.” Students create a three- to four-sentence explanation that may sound something like the following.

By giving students a sentence frame or a language structure to use when playing math games, you increase the likelihood that their learning will be deeper and longer-lasting.

4) Critiquing the reasoning of others.

For children to learn to be good listeners , we must teach them what good listening looks and “sounds” like. In my classroom, we talk about looking at the speaker without fidgeting, about the inner “listener dialogue.” We learn how to respond when you don’t agree. We talk about what it means to be a respectful listener. We discuss that deep listening is more than just being quiet. It’s about thinking about what you’re hearing and asking questions inside your head. And, most importantly, it’s about listening to learn and to understand. A reply should not be formulated until you’ve listened and processed what you heard.

Stephen R. Covey said, “Most people do not listen with the intent to understand; they listen with the intent to reply.” Learning to listen serves our children well, and math games afford them time to practice. As Bryan H. McGill said, “One of the most sincere forms of respect is actually listening to what another has to say.” Wouldn’t our world be a wonderful place if all the adults learned to construct arguments worthy of being listened to, and then, in turn, listened with the intention to understand and to learn?

For now, I’m just happy if my students use their emerging speaking and listening skills to make math game-play richer in my classroom.

How about you? What do you think about this idea that speaking and listening can be taught in math class? Please share your thoughts in the comments box below.