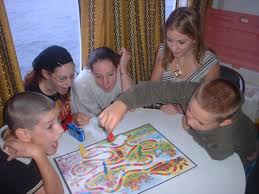 The Social-Emotional Benefits of Math Games

Playing math games in the classroom offers so many benefits! Depending on the game at hand, students engage in math practice, conceptual development, mathematical discourse, logic, spatial reasoning…and more. In addition, students use soft skills such as negotiation, emotional self-regulation, winning graciously, and losing gracefully.

Today we take a look at the social-emotional benefits of using math games in the classroom. These benefits include many of the interactions and self-monitoring behaviors that students need for work and in life. Helping children achieve them allows us, the teachers, to ascend to our highest calling – to prepare our students for the world beyond our classrooms.

To set the context, let’s examine the game Race to $1.00. This game, which is described at the bottom of this post, is typically played in grades 2-3. In addition, I’ve included other variations, below, for extensions to other grades.

Once game play begins, the students interact with one another in ways that require them to exhibit behavioral self-monitoring. For the sake of this post, the examples below relate to Race to a Dollar. However, they certainly apply to just about any game where two or more students interact.

When introducing the game, I provide the basic procedure, but I do not explain every possible action that may occur. Here’s an example from Race to a Dollar. Let’s say that after a few rounds, students once again roll a 5. They may realize that they can place a nickel on the game board rather than five pennies. This is when they excitedly raise their hands and ask me if it’s okay. The perfect teacher response is, “What do you think?” Without exception, the students want to create this new rule. The teacher responds with, “Do you both agree?” The students quickly confer and nod their heads. “Then that can be your new rule. As long as you agree that the rule is fair and makes sense, then you may use it.” Later, the students share this new rule with the class when they come back together. In my experience, the entire class negotiates and agrees that this should be a permanent rule. All students walk away feeling oh-so-empowered.

In last week’s blog post, we examined applying the speaking and listening standards while playing math games. Helping students learn to speak their minds clearly also helps them develop behavioral self-monitoring. Not only do students engage in math talk during game play, but they also express emerging thoughts and emotions. They may lose track of whose turn it is, disagree with their partner’s work, or want to negotiate rules. Whatever the case, “use your words” becomes a critical skill, and clarity is critical.

Due to the emotional nature of game play, learning to listen also plays a major role. As discussed in last week’s blog post, we humans frequently think about what we’ll say next rather than listening to understand. Playing math games provides a perfect opportunity for students to slow down their thinking and truly listen to their partner. Of course, both speaking and listening may occasionally require adult intervention. I find myself providing sentence starters to students as they learn to speak directly with one another. We also practice this during our opening mini-lesson or closing reflection so that all can benefit from the explicit intervention.

Being a Good Sport

When the end of the game approaches, students typically realize that there is going to be a winner and a loser. This can be a difficult situation for children navigate, regardless of which label they’ve earned. Helping children deal with losing gracefully and winning graciously sometimes requires direct instruction.  I engage students in group conversations about what each looks, feels, and sounds like. And then we rehearse appropriate words and body language. Students may also benefit in this way when playing partner games such as Race to a Dollar. Partner games allow students to work in pairs, both concurrently functioning as winners or losers. This give them the chance to experience camaraderie when losing gracefully and winning graciously.

Race to a Dollar

Materials for each pair of students:

Students place the game board between them. They are playing as a team to race to $1.00.

So…the next time you introduce math games to your class, take a few minutes to think through these four categories. How might you use this particular game, and every game, to afford your students opportunities to negotiate rules, speak clearly, listen graciously, and win/lose gracefully? The social-emotional benefits you help them develop extend well beyond game playing.

Please take a moment to let us know how you might use these ideas for a game you play in your classroom. You can leave your thoughts in the comments box, below.