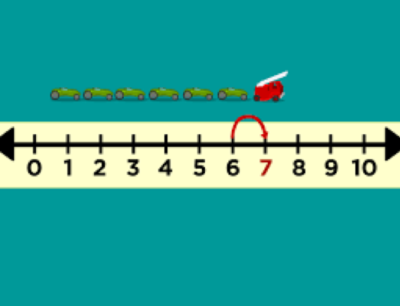 Does “Counting Up” Always Mean “Getting Bigger”?

Blog post #4 in the series, Lies We Tell Our Students

Let’s be clear…this “lie” is not really about counting. The misconception we address today centers on the notion of unit. When young children are learning to count, whether by rote or by counting objects by ones, fives, tens, etc., the pattern of the count results in a quantity that is larger (when moving from left to right on the number line) than the previous number.

What we’re really talking about in this post is this: When students are associating numerals and quantities, it’s important that they realize very early on that the unit matters. Whether they are counting marbles or elephants or apple halves or boxes of pencils, it’s important that the total amount in the set be identified with the common unit size of each item in the set.

Christina’s kindergarten class regularly engaged in “cooking” as part of their reading and math lessons. One day, she brought in the ingredients to make s’mores and posted the recipe for all to read. The class read the recipe together: each child needed 2 graham crackers, 4 chocolate pieces, and 1 large marshmallow.

Christina said to the class, “I brought 2 boxes of chocolate pieces for us to use for today’s recipe. Is that enough chocolate for everyone?” As was their routine, the students paired up and discussed this question with a partner for 30 seconds. When they came back together, one of her students said, “We don’t think you have enough! The recipe says we each need 4 chocolates, and you only brought 2.”

We teach children that when they’re following the counting sequence, a number that comes “first” is always less than the number(s) that come next. Of course, this is true with the counting sequence when we’re rote counting or counting objects that represent a common unit. However, young students (or even older students working with fractions) have often overgeneralized the notion of counting, so if they ignore the unit, they will misunderstand how to make the comparison.

What we really mean is that when children are counting “up” (with or without context), subsequent numbers are greater than previous numbers, assuming we’re counting from left to right on the number line and only when the units being counted are either the same or are directly comparable.

However, when the units change, the relationship between the numbers change, as well. For example, Which is greater, 2 dozen pencils or 5 pencils? As adults, we make this shift quickly and notice that we have to convert the “2 dozen” to “24” in order to make the comparison. However, young children may simply pick out the numbers and try to compare them directly, not realizing that they must make a unit conversion before they can determine which is number is greater. Therefore, they may think that “5” is greater than “2,” not realizing that the 2 dozen actually represents 24. Once they realize they are comparing 24 pencils and 5 pencils, the task is once again rudimentary.

Next Steps for Teachers: Provide students with many opportunities to deal with comparing quantities when the objects are described by different units. Examples include pencils & boxes of pencils, eggs & cartons of eggs, apples & bags of apples, cookies & bags of cookies, crayons & boxes of crayons, paper & packages of paper…the sky is the limit. Present the problem in writing first, to see if students recognize the need for “unpacking” to get to a common unit. Then, be sure to provide the real objects so they can see how the objects in one set are grouped differently than in the other set. Then, students can mentally or physically manipulate the objects so they are comparing items described by a common unit.

Next Steps for Leaders: Include a 5-minute math minute at the beginning of a grade-level meeting or staff meeting. Use the idea of “unit” to stimulate a conversation about how to help students at different levels grapple with the notion of unit. For K-2, it’s a matter of packing and unpacking  objects of different units so they can add or subtract. In grades 3-5, this is an important way to help students understand multiplication and the order of operations. In grades 3-8, teachers will want to venture into the world of fractions, where unit plays a major role in fraction comparisons and operations. And in all grades, K-8, context problems rely heavily on this notion of unit.

Counting is not just for kindergarteners!!!! The notion of unit resurfaces multiple times during the elementary years. Solving word problems, comparing and ordering whole numbers, performing multiplication in context, working with measurement units, value-counting money, telling time, working with fractions…all of these require a deep understanding of units and how to “fairly” compare them. We love hearing from you. Please share your thoughts on how you might introduce this idea to the students you work with. You can write your ideas in the comments box, below.