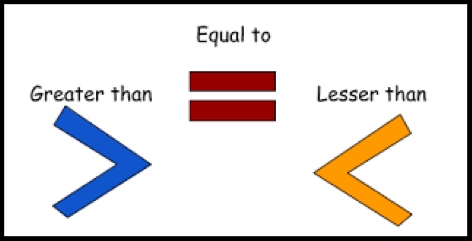 Does the “Longest” Number Have the Greatest Value?

Blog post #5 in the series, Lies We Tell Our Students

Many of the mathematics “rules” we teach students in the early grades come back to haunt them later on. Far too often, we teachers neglect to account for number sets beyond which our students are working in at the moment. Unfortunately, this disconnection leads us to inadvertently teach procedures that are misleading and fall apart in later grades.

Take, for example, ways in which we teach students to compare numbers to determine their relative values. We teach them to “line the number up on the right” and then look to see which number is “longer” (aka, has more digits).

Yikes! I’m sure you already see the error in this logic. However, our young children follow the rules we teach them to a tee, generally without question. And then, when they get to the point in later grades where this “rule” has expired (e.g., when decimal fractions are introduced), they don’t know what to do.

Ms. Jackson, fifth grade teacher, just started her unit on decimal fractions. She did a great job of setting her students up for success by teaching important concepts about fractions, units, and the difference between decimal and fraction notation. However, every time she asks her students to compare two decimal numbers, she notices that the majority of her students keep lining up the number using the digits on the furthest right-hand side rather than lining up the numbers at the decimal point, the point that separates the whole number from the fraction. She is reaching an unexpected level of frustration as her students just don’t seem to “get it.” What’s going on here?

In the early grades, students are only exposed to whole numbers and simple fractions. Furthermore, they only see fractions written in fraction form (aka, with a fraction bar), rather than written as base-ten fractions (aka, with a decimal point). Therefore, when comparing base-ten whole numbers, their teachers frequently teach them to compare the values of numbers by “lining them up at the right.” Although this process works for whole numbers, it is not generalizable to all numbers. This strategy becomes inappropriate once the base-ten numbers are extended to fractional amounts.

Part of the issue here is that students are introduced to number sets incrementally. We tend to focus on whole numbers in K-3: 0-20 in kindergarten, 0-100 in first grade, and 0-1000 in second and third grade. Fractions are introduced in grades 1-3, but only in fraction form, and usually only halves, thirds, fourths, sixth, and eighths. Therefore, when students are introduced to decimal fractions for the first time in fourth grade, they have not grappled with the nuances of working with decimal numbers with digits on both sides of the decimal point.

Nor have students grappled with the decimal point itself. Even though they are introduced to money concepts and notation in K-3, students have not had the opportunity to develop an understanding of decimal notation. They’ve only worked with whole numbers with little to no exposure to decimal numbers and decimal notation. The truth is, we are leading them to an inaccurate understanding of the number system and inadvertently teaching misconceptions about using decimal points.

So…what can we do about this?

Next Steps for Teachers

Next Steps for Leaders:

When we teach students to compare numbers, the way we talk about those numbers matters. In grades K-3, students work only with whole numbers. In this case, primary teachers often use an over-simplified rule such as “line up the digits on the right-hand side” as a means for comparing numbers. This approach can lead to a false generalization and misconceptions about how decimal numbers are compared once there are digits on both sides of the decimal point. Finding ways to talk about decimal numbers and decimal notation in grades K-3, prior to working with decimal fractions, plays an important role in facilitating learning across the grade levels.

What are your thoughts about teaching decimal number comparisons in the early grades? How can we connect whole number work with decimal fraction work in a way that builds student understanding over time? We would love to hear from you – please leave your comments in the box below.