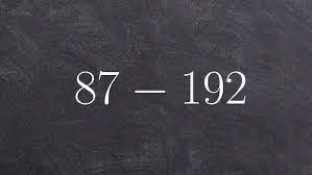 “You Can’t Take a Bigger Number from a Smaller Number”

Blog post #6 in the series, Lies We Tell Our Students

As a specialist in elementary mathematics teaching and learning, I learn so much by talking to my high-school-level colleagues. I learn about the things we say and do in the early years that must be “undone” in later years. Today I would like to introduce you to Donna, a colleague I have long worked with and whose work I admire.

Currently, Donna works with a group of pre-algebra students struggling with integer operations. Specifically, they struggle with negative integer operations. As we talked, it became evident that many of the difficulties her students face stem from misconceptions they developed in primary school. She shared a blog post with me that resonated. Here’s just a brief clip from that post:

“I’ve suddenly realized that negative numbers aren’t really the problem. Subtraction causes the disconnect, as a result of the tremendous bait and switch we pull when moving from basic math to the abstractions needed for advanced math.

“At no point are kids told that everything they’ve been taught is temporary, and that much of it will become irrelevant if they move into advanced math.”

Far too often, we inadvertently communicate ideas that are not easily unlearned in later years. In this case, when we say, “You can’t subtract a greater number from a smaller number,” we  know somewhere down deep that this will not be true later on. That said, during instructional planning and delivery, we tend to be short-sighted. We don’t stop to think about implications for the future because we’re too focused on the here and now.

Let’s take it just one step further. Our words may come back to haunt us within our grade-levels, as well. We’ve often followed “you can’t subtract a larger number from a smaller number” in a problem solving context and then had the children transpose the numbers. So then, when they face the standard algorithm for subtraction, why wouldn’t they simply subtract “bottom-up” when they get to a place where the digits appear to need transposition?

So how do we “tell the truth” to young children and still help them build proficiency subtracting whole numbers? It’s simple. We can be forthright with them by letting them know that there are lots of different kinds of numbers and that the rules they are learning now may not apply to other sets of numbers.  Regularly show them negative numbers and fractions to let them know that there are numbers that are less than zero and some numbers that fall between integers on a number line.

Next Steps for Teachers

Next Steps for Leaders:

Attending to the language we use with young students is critical. When planning instruction, think beyond the rules and procedures you’re discussing with students. Ask yourself, “Is this rule always true or just sometimes true?” This could make a world of difference for your students and for their future teachers!